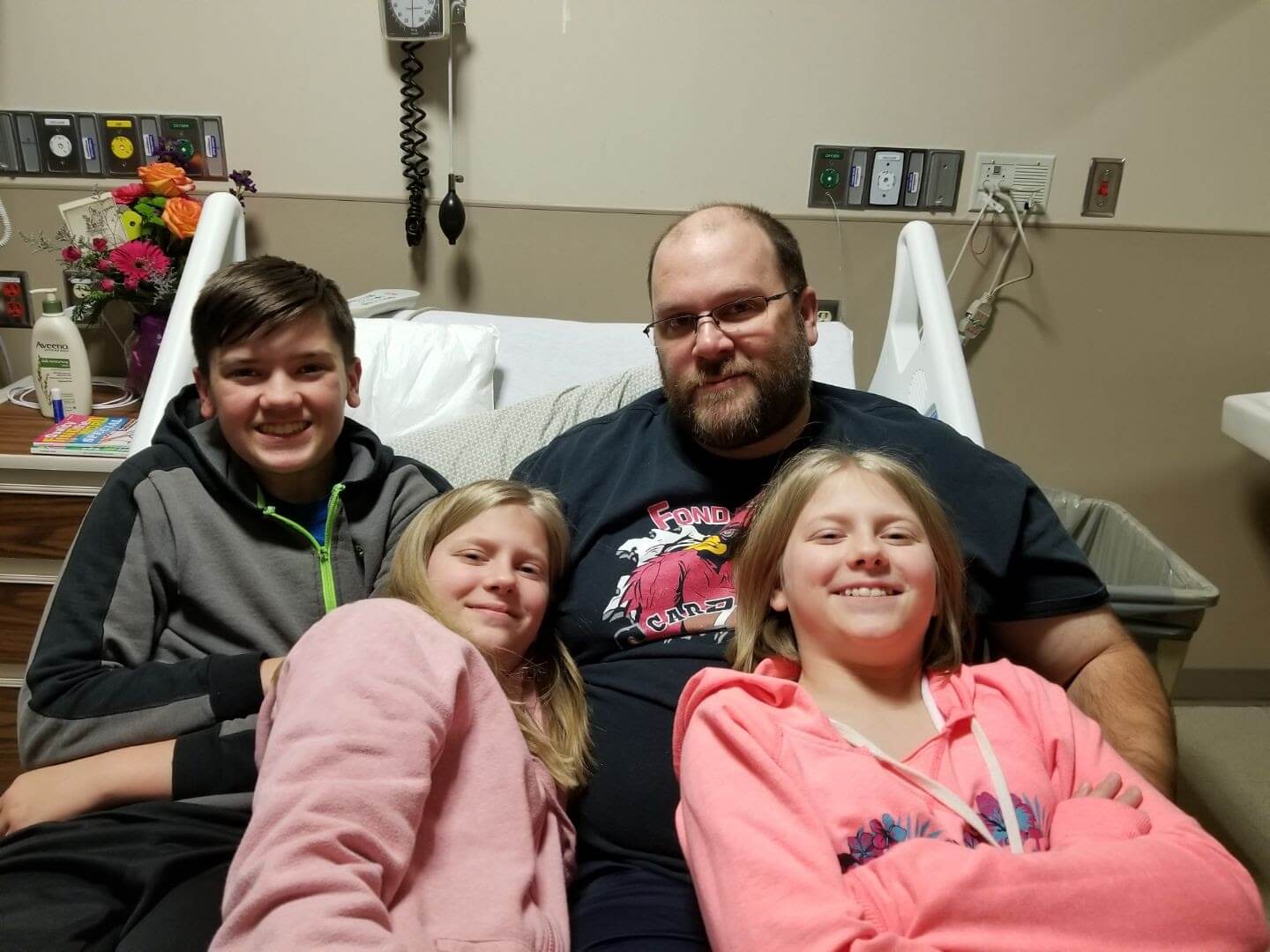 Health Hero Matt Moore produces Hormel Health Labs Thick & Easy® products for patients with dysphagia. When his own health took a turn for the worse, he relied on the very products he’d created to stay nourished and hydrated.

It started with a headache—a sudden flash of pain exploding behind Matt Moore’s left temple. He didn’t think much of it. He poured himself a glass of water and started getting ready for work. The headache began to subside, but it was quickly replaced by dizziness and a vague sense that something was wrong with his vision—with his left eye in particular. Moore was concerned, but the thought that this was something serious did not cross his mind. He ate breakfast and drove to the Rosendale, Wisconsin food plant where he is a quality assurance manager, believing this was nothing more than a bad night’s sleep. “I thought it would just go away,” he says.

By the time he was at his desk, the problems were getting worse. “About an hour in, I was trying to type an email and couldn’t hit the correct keys with my right hand. I also tried to pull open a file cabinet with my right hand and completely missed the handle. I finally thought something wasn’t right.” He texted his wife and told her that he might check himself into urgent care. She had a bad feeling about it and left work to drive him to the emergency room instead. They kept him overnight for testing, but by morning he’d lost the ability to speak clearly. Realizing that his condition was beyond the capabilities of this small hospital, the doctors transferred him to Milwaukee for emergency surgery.

Moore had suffered multiple ischemic strokes. These are caused by blockages in any organ that supplies blood to the brain. In Moore’s case, there was a big tear in one of his carotid arteries—the prominent blood vessels on either side of his neck. Carotid problems of this magnitude are typically the result of major physical trauma—a motorcycle accident, for instance—but Moore hadn’t experienced anything of the sort. To this day, no doctor knows exactly what caused the tear, but for Moore, lying in his hospital bed, unable to eat, drink, or speak, the result was the same as if he’d been hit by a bus. “My artery was 99% blocked,” he says.

The surgeons were able to successfully insert three stents—tiny metal coils that expand inside an artery, forcing open blockages until a new layer of skin can grow in. His vitals were stable, but for three days he was unable to swallow a single drop of water.

Swallowing difficulties, known as dysphagia, are common in the aftermath of a stroke. Studies have found that up to 50% of people will be completely unable to swallow for weeks after an episode. When the brain is deprived of blood, certain functions begin to shut down. In the case of Moore and many others, this can include activity in the regions that control the multitude of tiny muscles that the brain activates every time food or drink passes through the esophagus.

“Most people understand that people with dysphagia can’t handle solids,” Moore explains. “But they might not know that thin liquids are just as big a problem.” Every time a healthy person takes a sip of water, their brain automatically triggers the long chain of muscles that help ease the fluid down the esophagus and into the stomach. For someone suffering from dysphagia, however, these muscles will fail to engage, causing them to sputter and cough as if they were drowning. Even worse, the condition often leads to pneumonia.

Intravenous fluids and feeding tubes can keep a patient hydrated and nourished, but as anyone who’s been outside on a hot summer afternoon can tell you, there is no substitute for a tall glass of cold water. So when, on the third day of Moore’s recovery, the doctor brought him a cup of Hormel Health Labs Thick & Easy® beverage, it was a godsend. “I’d never been so thirsty,” he says. “I felt like I’d been crawling through the desert. It was a sight for sore eyes.”

Hormel Health Labs works with Moore’s plant to formulate their Thick & Easy® juice products in several different consistencies. Food scientists and dysphagia experts have discovered that, somewhere between too thin and too solid, there lies an optimal range of thickness that allows patients to ingest their food and drinks comfortably—and safely.

For Moore, however, the significance of that first glass of Thick & Easy® went deeper than his thirst. For twenty two years, he has worked as a quality assurance manager at one of Hormel Foods’ partner plants. He oversees the production and packaging of a number of Thick & Easy® products, but he knew that his plant was the only one in the country that produced Thick & Easy® 4oz cups. Moore had been personally involved in the creation and development of this line. “It doesn’t go more full-circle than that,” he says. 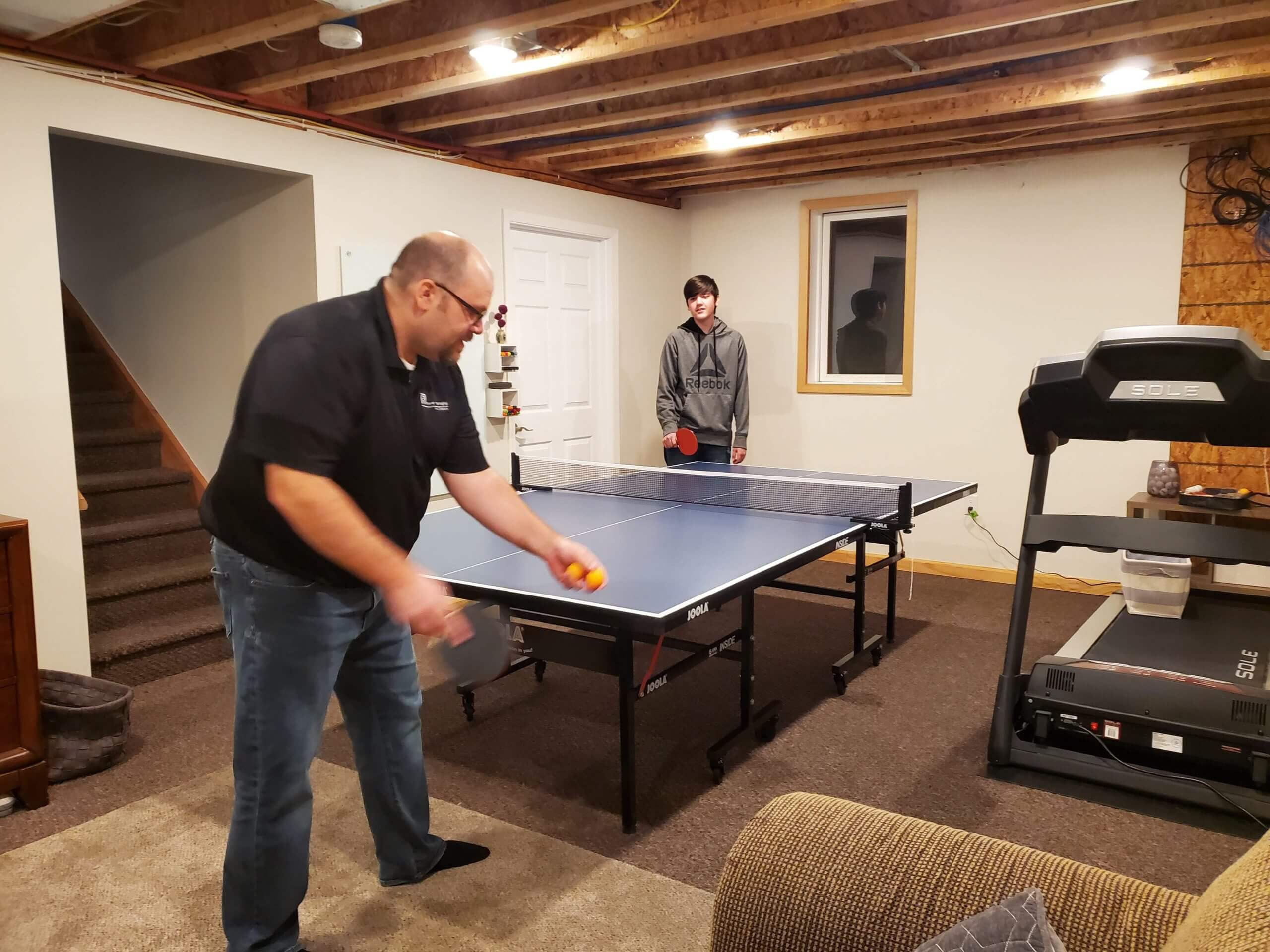 Thickened beverages and pureed foods have been around for a long time, but they have traditionally been considered unappetizing and boring, forcing dysphagia patients to choose between maintaining their nutrition or enjoying the taste of what they’re eating. Hormel Health Labs, in cooperation with manufacturing plants like Moore’s, work to create solutions that look and taste more like regular food, allowing patients to stay healthy while reclaiming that universal pleasure of savoring a good meal.

Moore, a Wisconsin native, decided to pursue a career in food science after watching his father’s experience working with a food company. “I thought it would be interesting, as there are many facets of work within the food industry. I wanted a job with real-world impact.” He enrolled at the University of Wisconsin, River Falls. “It had a good program and I liked the fact that it was a smaller college in a small city.” He did well in school, but it never occurred to Moore that his studies would affect his life so directly.

In the two years since the strokes, Moore has made incredible progress on his recovery with the support of his family. His speech was the last thing to return to normal, remaining in therapy until 2019. “I still don’t think my speech is the same as what it was prior to the stroke, but I’m happy with how things turned out.” Any lingering effects, however, are so subtle that they are virtually impossible to detect.

He’s been able to get back to the things he loves most: spending time with his family, and hunting. Fall is deer season, and even though the mornings can be fiercely cold, Moore works up a sweat as he trudges through the forest. The first thing he does when he comes home is pour himself a big glass of ice water—a simple joy that Moore understands far better than he did before.

For his dedication to creating more palatable solutions for dysphagia patients and for his efforts to overcome his own health challenges, Hormel Health Labs is proud to honor Matt Moore as a “Health Hero.”